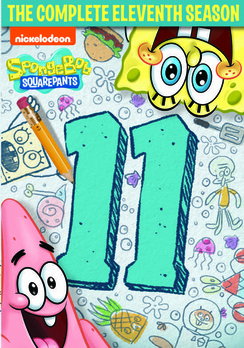 "Who lives in a pineapple under the sea?"

"Absorbent and yellow and porous is he"

"If nautical nonsense be something you wish"

"Then drop on the deck and flop like a fish!"

The answer to this undeniably catchy earworm call is of course "SpongeBob SquarePants!" And just like that, you start to understand the fascination of a little cartoon created by a former marine biologist.

In 1999, the aforementioned marine biologist Stephen Hillenburg debuted a new cartoon show that would become the fifth-longest animated series (and going). SpongeBob SquarePants is truly the result of the old adage of "write what you know." The series follows titular character SpongeBob and his friends as they navigate life in Bikini Bottom.

And if you couldn't figure it out from the theme song, Bikini Bottom is located at depth under the sea.

SpongeBob SquarePants: The Complete 11th Season continues the exploits and hilarious hijinks of SpongeBob and friends over the course of 50 hilarious episodes. From "Cave Dwelling Sponge" to "The String," old friends and new acquaintances intermingle in the underwater paradise imagined by Hillenburg so many years ago.

For over 20 years, SpongeBob SquarePants has been a part of the cultural zeitgeist and while I continue to laugh along, I do find myself questioning the show's appeal from time to time. And yet, my kids are now massive fans and it truly is a show that allows different generations to connect in comedy

Is it simple? Sure. Is it dumb? Most assuredly. And yet, it's this simple base-level of comedy that has survived the test of time. Whether it's the Three Stooges or South Park, simple physical comedy that targets the lowest common denominator continues to find audiences wherever it goes.

Of course, to say that it's dumb humor is truly minimizing the successful franchise that is SpongeBob SquarePants. You don't air over 250 episodes just because you have plenty of flatulence jokes. No, there's something much more powerful going on with this show.

I think the true secret to the series is only slightly less secure than Mr. Krabs' secret formula for his Krabby Patties. There's just something about the bond between SpongeBob, Patrick, Squidward and Sandy that is timeless. They are fierce friends and we can easily identify with them and their struggles/comedic escapades.

Like any good season of SpongeBob SquarePants, there are classic standalone episodes such as "Squid Noir" and "Doodle Dimension" and plenty of episodes that move various narratives forward such as Plankton's Quixotic quest to find out Mr. Krabs' secret formula.

The review of SpongeBob SquarePants: The Complete 11th Season was a bittersweet one as I was reminded that it was during the original airing of this season that creator Stephen Hillenburg passed away. While his involvement had decayed a bit over the years, it's hard to argue that his death didn't curb some of the show's momentum.

No one knows what the future holds, but the recently announced thirteenth season will only contain half of the normal episodes of previous seasons. Nothing can last forever, but SpongeBob SquarePants has achieved crossover success on the big screen and continues to tickle funny bones of both the young and the old.

My kids were rapt as we reviewed this DVD and they certainly hope to have SpongeBob in their lives for many years to come. Perhaps, some day they will be able to share SpongeBob SquarePants with their children.