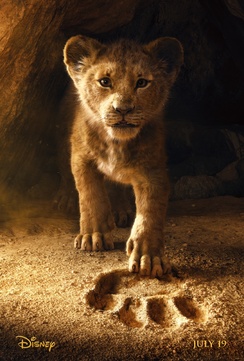 Look, I love Jon Favreau and the voice cast that he curated for The Lion King is top-notch. In fact, there were several very inspired casting choices that turned in better performances than their original animated counterparts. And yet, as I was watching it, there just felt like there was something missing.

It's hard to explain and I really don't know what was missing, but I was beset with a nagging feeling as I watched the film that there needed to be something more. From a visual viewpoint, it was a technical masterpiece and yet another step forward for CGI, but it was almost like there was a tit-for-tat exchange between technical wizardry and the story's soul.

The new film is basically a scene-by-scene remake of the original film, so unless you've been living in a cave for the last 26 years, then you know the story. For those that need a refresher, The Lion King is the story of a young lion cub that is in line to rule the Pride Lands, but he finds himself in exile after a series of orchestrated events. Now, he must lean on his new friends to get back what is rightfully his.

One of the hardest things that I had to reconcile with the live-action version of the film was the suspension of disbelief. There's just something inherently accepting about an animated film. Talking animals? Sure. Predators palling around with their prey? OK. Talking mythical creatures threatening to take over the world? Why not?

But once you attempt to apply the same concepts to live-action, there's a bit of a pause in acceptance. Why isn't that lion eating that warthog? That would never happen for real in the wild, so why do they get along in this movie? And don't even get me started with the talking. Anthropomorphizing the speech in animals is a lot easier with animation. It just looks funny and weird with live-action. It's unnatural and takes you out of the picture.

With all that said, I didn't hate the film. Sure, many critics piled on the film and called it a cash grab, but I wouldn't go that far. I went into reviewing the live-action Aladdin film with a predetermined bias that I was going to hate everything about that movie and I actually enjoyed it quite a bit. So, I can see the value in Disney going back to its vault and playing with some of their animated classics in a live-action world, I just don't think this was a particularly strong choice for a remake.

Unfortunately, the allure of money being what it is, I don't think we will see an end to these films any time soon. And there is plenty to love about this remake too. Keeping James Earl Jones as the voice of Mufasa was really the only choice they could have made. Could you imagine the outcry had they replaced him?

The songs are still amazing and new arrangements and help to keep them sounding fresh and new. As I mentioned, the addition of Billy Eichner and Seth Rogen as Timon and Pumbaa were inspired and helped to take these iconic characters to even greater heights.

The film looked and sounded spectacularly on 4K UHD as you would expect. This format is perfect in displaying the advanced technology that the filmmakers used to bring this animated classic to life. And yet, despite all of this, there was just something missing. Had the original animated film never been made, I'm sure we would be discussing this movie as an amazing feat in filmmaking, but in comparison, the soul is missing just that little extra bit that makes all of the difference in the world.

The Lion King is now available on 4K UHD, Blu-ray and DVD.