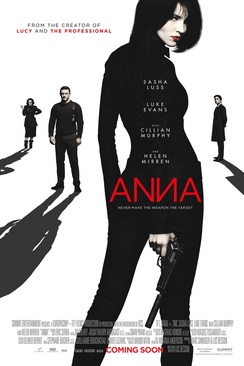 Stop me if you've heard this one before. An unassuming young female projects a timid front, but is really a sharp killing machine in sheep's clothing.

You may have seen her in The Long Kiss Goodnight, Point of No Return, Red Sparrow, or Salt. Heck, you've seen it many times within Luc Besson's own filmography such as La Femme Nikita, Lucy, The Fifth Element or Leon, the Professional.

The point is that Luc Besson has sort of cornered the market on badass hitwomen for hire and just like we never get old of seeing copious amounts of blood in a Quentin Tarantino film, we will get tired of strong, kickass women in a Luc Besson movie.

This time around, a woman's striking beauty belies her ruthless nature as one of the world's more feared government assassins. Trained by the KGB and turned as a double agent by the CIA, Anna comes to realize that with her level of skills, the only way to exit the business is through death.

Besson's seminal breakthrough hit Leon, the Professional introduced a young girl, played expertly by Natalie Portman, to the world of contract killing when her family is slaughtered by hitmen. Taken under the wing of a hitman, the pair teach each other more than simple lessons on how to survive.

Since then, it has almost seemed like Besson has been writing a would-be sequel with a grown-up Mathilda ever since. The young girl that was traumatized by the events of Leon could have grown up to be any number of the strong female protagonists in Besson's catalog, but I think Anna might finally realize what an adult Mathilda would be like as an assassin for hire.

Thanks to the popularity of the ultra-violent John Wick series, there doesn't seem to be any act of brutality that is taboo. Anna proves that to be true as well with several scenes of ultra-violence of her own and bloody death sequences that rival the aforementioned series of films for their originality and creepiness.

While it's easy to make a direct comparison to all of those lesser films mentioned above, the strong cast is what surely makes Anna stand out from the competition. The film is a strong debut for the young leading lady Sasha Luss, but she's given plenty of guidance by a formidable cast that includes Cillian Murphy, Luke Evans and Helen Mirren. In particular, the latter actress shows the most scenes with Luss and their chemistry is one of the highlights of this twisty narrative.

Much like any good spy thriller these days, there are twists layered upon twists all twisted up in a knot. I certainly won't spoil it for you, but suffice to say, I found myself surprised by several of the plot reversals. Then again, Luc Besson doesn't reinvent the wheel and he doesn't have to since he practically wrote the book on female assassins.

Anna is one of those films that critics can't wait to pan while normal audiences find it gratifying. This sort of disconnect will always be with us, but rest assured that if you are fan of the John Wick series or female assassin movies, then you will more than get your money's worth with Anna.

Anna is now available on 4K UHD, Blu-ray and DVD.