Review: 'Incredibles 2' touches the superhero in all of us 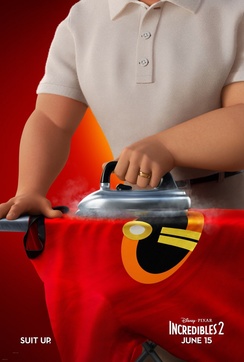 Pop quiz, hotshot. What Pixar film has grossed the most money at the North American box office?

If you said Finding Dory, your information needs an update. A couple of months ago Incredibles 2 surpassed $600 at the box office and eclipsed Finding Dory's previous record-setting mark by over $125 million.

For a company that long dragged its feet on sequels to its massive hits, its top three top-grossing films are all sequels and half of its top ten movies. In a day and age where we routinely hear about a film's sequel getting a green light before the first film is even released, Pixar was once hailed for their reluctance to make a "quick cash grab."

The thing is that unlike most sequels, Pixar took their time and gave them the same loving detailed attention as the original films and the result is that the sequels were truly fun movies. It was anything but a cash grab.

Incredibles 2 picks up (quite literally) were the first film left off and follows the family of Supers as they adjust to a "normal" life. When Helen is recruited to bring back the Supers over Bob, he has to accept being a stay-at-home Dad until a new villain emerges that challenges all of the Supers to bring him down.

The brilliance of the Incredibles films is their ability to humanize superheroes. It's a tactic that not only paid off for them in the first film but continues to provide plenty of laughs in Incredibles 2. The Parrs are just like any other family, just with a wee bit of superpowers.

Pixar's ability to balance action and laughs is something that they have definitely cultivated over the years and pays off nicely in Incredibles 2. While the action sequences are quite enjoyable, I often find myself thinking of the humorous scenes between Bob and Jack-Jack when he's just getting his powers as some of the more impressive scenes.

These films have always been able to bridge the age gap between young and old. Perhaps the best example of this is Up where the generational divide is on full display, but Incredibles 2 offers stiff competition. As a father to a couple of young kiddos, I found myself relating to so many of Bob's predicaments as an unsure parent. Likewise, I'm pretty sure that my kids' favorite Super was Jack-Jack and his unpredictable ways.

I was fortunate to review the 4K UHD Ultimate Collector's Edition and they weren't kidding. This offering truly maximizes the potential of home entertainment in ways that other studios should take notice. The special features are too numerous to list here, but suffice to say they take up almost two pages.

The highlights were definitely the 10(!) deleted scenes, various featurettes, and the inclusion of the theatrical short Bao. But the best part has to be the all-new mini-movie "Auntie Edna."

Not only was this short good enough to stand alone on its own merits, but it doesn't feel out of place on the Incredibles 2 Blu-ray. It not only sheds some much needed light on the hilarious, but criminally underutilized Edna character, but it provides even more comic relief in a tsunami of laughs.

As you would expect from an animated film, the 4K video track is flawless and takes advantage of the HDR to bring everything onscreen to life in a more brilliant color. The Dolby Atmos audio track is as amazing as it was in the theaters and its inclusion guarantees a high standard for home entertainment enjoyment.

Incredibles 2 is another fine sequel from the folks at Pixar and now that they have gotten a taste for them, there doesn't appear to be an end in sight. Look, I truly applaud Pixar for sticking to their guns for so long, but at some point you have to give the people what they want. And what they want it more of the Supers.

Incredibles 2 is now available on 4K UHD, Blu-ray and DVD.