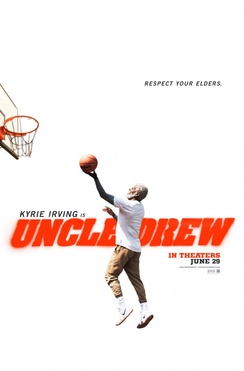 Look, every movie will not be nominated for an Oscar and that's OK. Some films are simply put upon this Earth to entertain us for 90 minutes or so and we go about our way. No fuss, no foul.

Of course, Uncle Drew has plenty of fouls given that it is a basketball movie, but it will delight the young and might just put a smile on even the most curmudgeonly face. No, it won't win any awards (save for a participation trophy), but it's all about the enjoyment of playing the game, right?

Uncle Drew takes its inspiration from the Pepsi Max commercials in which Kyrie Irving donned old person makeup and schooled kids on the playground courts. For the film, the character of Uncle Drew returns with one last chance at winning the Rucker Classic with his old team. And boy, do we mean old.

If you've seen any sports movie in your life, then the plot of Uncle Drew won't surprise you very much. It's basically an amalgamation of several sports clichÃ©s with a bit of The Blues Brothers thrown in for good measure. You've got the underdog spirit of Hoosiers and The Mighty Ducks mixed with the redemption arc that we've seen in Mystery, Alaska and The Rookie. In short, if you've seen it in a sports film, there's a good chance that it pops up in Uncle Drew.

If you're looking for something that will dazzle you with insight, Uncle Drew is not that film. That's not to say that it's bad, it's just a harmless film in which you know the outcome from the opening credits and it progresses pretty much as you expect it to.

While the story is formulaic and a bit of a retread (see above), the real redeeming quality of the film comes from the hilarious comedy shared by the immensely talented cast. Is there anyone hotter in comedy right now than Tiffany Haddish? She is clearly knocking it out of the park and absolutely steals every scene that she is in. The only sad thing is that her character doesn't get a lot of screen time relative to the actual basketball players, but her contributions make the film quite enjoyable.

I was pleasantly surprised by the comedic chops by the actual players as well. Like him or not, Shaquille O'Neal is a bit of a known quantity thanks to his earlier film work. I'm not the biggest Shaq fan, but he's clearly in his element here and he's a bit more reserved than he has been in the past. Kyrie Irving clearly has an affection for the character of Uncle Drew and while I doubt the film's box office performance will spur the studio to ready a sequel, I wouldn't say no to another helping of geriatric basketball players.