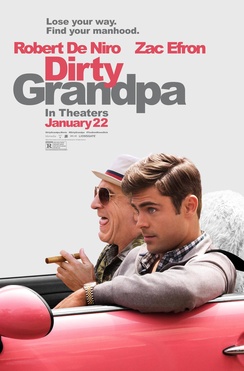 Look, I have a thing with Zac Efron. Note, I said "thing with" and not "thing for" lest you think what follows is some sort of misplaced amorous desire. While I have softened a bit (no pun intended) on Zac recently, I still stand by my contention that his films are simply foreplay leading up to the moment when he gets to take his shirt off to show off his chiseled abs.

I'm not afraid to admit this, Zac Efron has a great body. And if my body looked like that, I would be taking off my shirt as much as possible too. But, it gets a bit distracting like looking for the Hitchcock cameo when you're watching one of his films just waiting for him to disrobe. Oh God, I just compared Zac Efron to Alfred Hitchcock.

On the other side of the coin, I absolutely adore Robert De Niro, so this film presents quite the conundrum. I purposely avoided this film when it came out two years ago, but after watching Zac Efron in The Greatest Showman, I was a bit optimistic when the opportunity presented itself to review the 4K Blu-ray of Dirty Grandpa.

I should have trusted my gut on this one.

Dirty Grandpa follows a geriatric man (De Niro) who recently loses his faithful wife after a lifetime of marriage and seeks to take one last bender with his uptight grandson (Efron). Along the way, the pair gets into their fair share of hijinks and put aside their age difference to learn something about themselves from each other.

If the film seems derivative, it should. There's no hiding the fact that they are simply trying to recreate The Hangover vibe with an older set, but there's just something missing. While De Niro and Efron are game participants, they just never reach the same level of intimacy that De Niro fostered with Ben Stiller in the Meet the Parents movies.

Again, the film follows a predictable blueprint and you just know that at some point Zac Efron will end up in a Flex Off sans shirt. As seen in the trailer, Robert De Niro tries to steal his spotlight and this scene serves as a metaphor for the entire film. At various points, it simply devolves into a contest to see which one of the lead actors can play against type the best. Since I don't particularly care for Efron, I give the victory to Bobby D.

It's not all doom and gloom though, I was particularly impressed by a couple of the undercards. Aubrey Plaza is absolutely perfect as the sex-crazed vixen looking to hook up with De Niro's grandpa. Honestly, I could probably watch an entire film of this character and her journey of working out her sexual peccadillos.

Another small part that helps to bring the film together is played by Jason Mantzoukas. I was late to his coming out party, but I have become a fan of his thanks to his work in Brooklyn Nine-Nine. It's refreshing to go back and see some of his earlier work and appreciate all the charm that he brings to an otherwise forgettable role. These are the types of actors that keep Hollywood afloat.

This was a curious selection for the 4K UHD treatment in my book. There isn't a sequel heading to theaters to draft on and comedies tend to be the films that benefit least from the technical enhancements of 4K UHD.

Don't get me wrong, the Dolby Vision transfer is a superior version of the film as the HDR and Wide Color Spectrum allows the beach scenes to appear as life-like as possible. These scenes seem to be washed out on the Blu-ray as being too bright, but they shine on this transfer. If you need to see every ripple on every one of Zac Efron's abs, then the 4K UHD is the version for you.

The 4K UHD also comes with a Dolby Atmos soundtrack, but again I'm left wondering why? Save for the Flex Off scene and maybe one or two others, the movie doesn't really feature the type of action that truly shows off the gains you get from the Atmos treatment. In comparing it to the 5.1 DTS track on the Blu-ray, the differences truly are negligible.

I was really hoping that maybe the 4K UHD would have a boatload of new bonus features that would make up for the small differences, but all of the included bonuses were already available on the Blu-ray version. I know it has only been two years since Dirty Grandpa came out, but throwing on even one or two new things would have made it worthwhile to upgrade to the 4K UHD.

As it stands, if you are a fan of the film, it is likely that you already own the Blu-ray. If that is the case, I would be hardpressed to recommend an upgrade to the 4K UHD version. However, if you are a Zac Efron completist and, for some reason, you were holding on buying Dirty Grandpa, then the 4K UHD is the perfect disc for you. 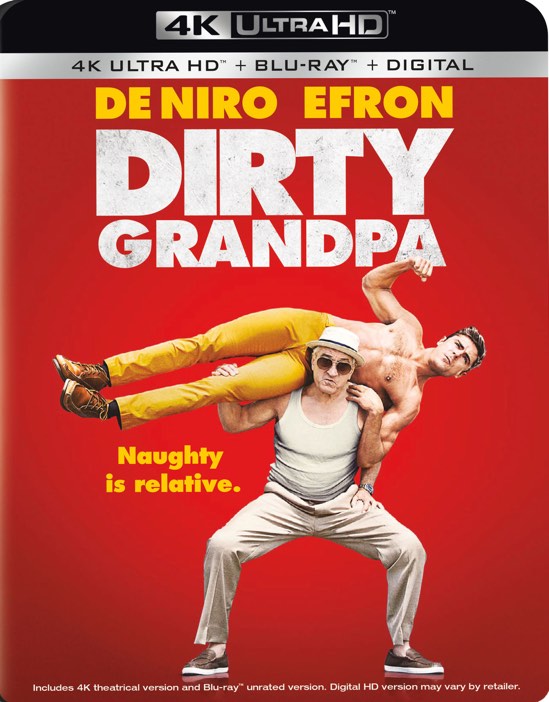