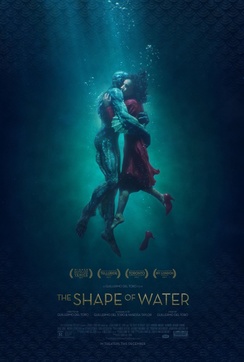 If there's one thing that you can count on when it comes to the Hollywood Foreign Press Association and their Golden Globes awards, it is to expect the unexpected. I mean, this is the awards show that classified Get Out as a comedy this year.

So, when they announced their nominations this morning for the 2017 Golden Globes awards, I was a bit surprised that they weren't as out there as usual. Guillermo del Toro's period piece of interspecies love led the way with a massive seven nominations. More traditional Awards season fare The Post and Three Billboards Outside Ebbing, Missouri paced the nominations with six apiece.

Aside from the Get Out kerfuffle, there were some other other rather interesting nominations. The international May-December male homosexual love story Call Me by Your Name earned multiple nominations, including one for Best Picture, Drama. As you might recall, Call Me by Your Name's biggest claim to fame thus far has been the revelation that filmmakers had to digitally remove parts of Armie Hammer's genitalia from several scenes due to the short shorts that he wears.

On the TV side of things, the usual suspects Game Of Thrones and This Is Us were recogized as well as newcomers such as Big Little Lies and The Handmaidâs Tale. We went through and handicapped the nominations by picking (OUR PICK) who we think will win each category. Fair warning, we totally guessed at most of these, especially on the TV side of things.

The Golden Globes ceremony will be broadcast live on NBC on January 7.