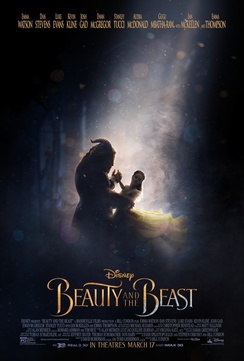 This weekend was (mostly) free of any real surprises, both at the box office and on the basketball court. There were very few upsets and even fewer buzzer beaters. Likewise, Beauty and the Beast easily led from wire-to-wire at the box office.

It's not that I was really expecting any of the other films opening to give the Emma Watson starrer much competition, but the way it dominated the competition was rather impressive. I mean, it's not like Disney needed the money, but this weekend's results pretty much guarantee that we will continue to see more of these live-action adaptations of Disney's classic animated films.

In fact, we already know that there are several in the pipeline for the next few years including, Mulan, The Lion King and Dumbo. Thanks to the success of The Jungle Book and this weekend's Beauty and the Beast, I think it's safe to assume that we will soon see live-action remakes of all of Disney's animated classics.

When it comes to opening big films, no one does it better than Disney. Not only is Beauty and the Beast's $170 million the largest opening for a film in March ever, it is also the seventh-highest opening of all time. Disney now owns six of the top seven openings ever and it stands to improve upon that record as The Last Jedi is pretty much a shoe-in for a top 10 opening later this year.

With Avengers: Infinity War set to open next year, it's not inconceivable to think that Disney will soon own nine of the top ten openings of all time. Of course, Universal might have something to say about that as it readies Jurassic World 2, the sequel to the second highest opening, for release next year.

It looks like we were a little light with our predictions for Beauty and the Beast. Dannette looks to rewarded for her faith in the Disney brand, but even her prediction of $360 million will most likely not be high enough. No, I would predict right now that Beauty and the Beast will end its run closer to $400 million and it's safe to say that the 2017 box office is now poised to surpass last year's record-setting performance.

In second place, Kong: Skull Island lost about half of its opening-weekend business with $28.8 million in its second weekend. The film surpassed $100 million and looks like a good bet to finish right around the $200 million that I predicted last week. While I think this is a great number for this film, it's becoming a bit discouraging that films are being unfairly burdened with high expectations.

It's like the box office has become a blockbuster or bust business, which is sad because not everyone wants to see the latest special effects extravaganza. Of course, this does mean that your local arthouse theater or savvy independent theater chains could find a nice little niche business catering to those films that are being overshadowed by these bloated films.

In third place, Logan continues to prop up business at Fox with about $18 million in its third weekend of release. The film is poised to top $200 million this weekend and should finish right around $250 million, a great total for the latest mutant superhero film.

The only other new, wide-release film this weekend was The Belko Experiment, a microbudget horror film of the variety that has performed well lately. The twist is that it was written by Mr. Guardians of the Galaxy himself James Gunn.

It only made a paltry $4.1 million in its opening frame, but that's plenty to insure it will make a profit. On the other hand, it's no Get Out which should surpass $150 million in the next week.

Thanks to the long basketball weekend, I didn't get much of a chance to track down Quick Hitters. As such, they will return next week.