The Oscar goes to... er, wait a minute 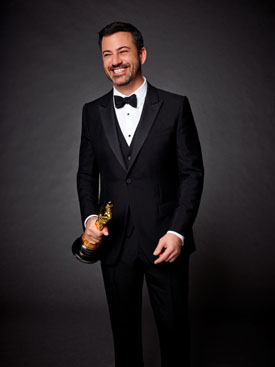 What's the old saying? One bad apple spoils the bunch? Well, there are plenty of things being said about the 89th Academy Awards this morning, but the one that everyone will be talking about for years is how it ended.

Before the whole Best Picture fiasco, the night was going along quite well. Sure, there were some bumps along the way (there always are) and the telecast was going long (it always does), but Jimmy Kimmel was doing an admirable job in the role as thankless Oscars host.

Let's face it, there are very few people that can pull off hosting the Academy Awards and even less that would be willing to do it again. Billy Crystal was excellent and that's why he was the host for so many years in a row, but since his departure, the producers of Hollywood's biggest night has been searching for a worthy heir.

After several false starts, ABC's home-grown late-night wunderkind Jimmy Kimmel was finally given his shot and sadly, people will only remember the way it ended. What transpired was a live TV moment that have become almost non-existent in recent years as FCC-mandated slight tape delays allow producers to beep out or otherwise alter any "live" shenanigans, but the folly last night was truly a throw back to the glory years of live TV.

The glitch began when presenter Warren Beatty opened the envelope and noticed that the card inside read "Emma Stone, La La Land." He paused and looked bewildered, which at the time seemed to be a schtick he was doing. He turned and showed the card to Faye Dunaway who immediately announced La La Land as the winner.

There have been many explanations and conspiracy theories bandied about, but it seems that the true story is just a simple case of human error. PricewaterhouseCoopers is in charge of tabulating the Oscar results and they send two employees to the Oscars with matching satchels, each with a complete set of winner envelopes. Theoretically, one employee is positioned on each side of the stage and then they give the presenter the appropriate envelope.

The employee simply gave Warren Beatty the wrong envelope. Apparently, there is a failsafe protocol in case a presenter goes rogue and announces a winner that did not win. Since the PricewaterhouseCoopers employees are the only ones that know the winners, they are supposed to notify the stage manager of the flub and then action is taken to correct the mistake.

Brian Cullinan is one of those PricewaterhouseCoopers employees and he bears an uncanny resemblance to Matt Damon. You can see him on stage amid the turmoil trying to fix things. Live, I thought it was Matt Damon and figured it was just another Kimmel prank.

It wasn't and Moonlight was correctly named as the Best Picture of the year. Martha Ruiz is the other PricewaterhouseCoopers employee and she just posted this shot from the red carpet.

On the Red Carpet..... pic.twitter.com/9dxVUlYLQS

I'm sure the fallout from this flub will be felt for awhile and should result in some changes to next year's show. While all those involved handled the situation with great aplomb, no one likes to have that much egg on their face.

La La Land led all films, cashing in on six Oscar wins, including Emma Stone for Best Actress and Damien Chazelle for Best Director, but it was Moonlight that will most likely gain the most from the mixup. As it happens, Moonlight debuts on DVD and Blu-ray tomorrow, so Lionsgate/A24 will certainly be able to strike while the iron is hot.

All of the winners are listed below.

Actor In A Leading Role

Actress In A Leading Role

Actor In A Supporting Role

Actress In A Supporting Role