Monday Mixer: Is 'The Abyss' finally coming to Blu-ray? 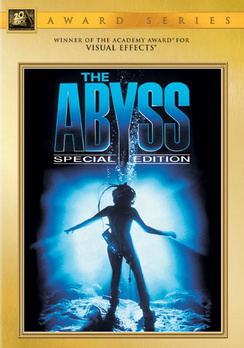 So, did anything exciting happen this weekend? Oh yeah, it was the annual convention of awesomeness and fanaticism known as the San Diego Comic Con. Don't worry, we will have complete breakdown of all of the amazing trailers later, but isn't cool that we live in a world where the idea of a Comic Con can exist?

We tend to shy away from politics on the site (wise choice methinks, especially considering the current atmosphere), but regardless of your political leanings, we can all come together and enjoy films. Those two hours or so being entertained is exactly what we need it to be and Comic Con is always a reminder to me that I'm thankful to live in a society the values freedoms and allows us to gather safely and get our geek on.

Of course, my bucket list includes actually making the pilgrimage out to San Diego and one of these years I'm going to make it. The nice thing about the Internet though is that we can live vicariously through the geeks much luckier than us.

So, while it was a busy weekend on the left coast, the rest of America got busy at their local theaters. How busy? Well, it funny you should ask.

For just the sixth time ever, the top five films have all grossed over $20 million. Think about that for a minute, this weekend's accomplishment has only been done a handful of times and that blows my mind.

Had you asked me last week how many times this has happened, my answer would have been well into double digits. What this weekend did do that was unique was to have the highest grossing #1 film in this limited situation. Star Trek Beyond earned $59.6 million to nab the top spot. While this number is a slight drop from the first two films, which both opened over $70 million, it is considered a win and the critical response has done a 180 from Star Trek Into Darkness.

This positive momentum for Star Trek Beyond is important because Paramount has already announced that Star Trek 14, the fourth with the new cast, will be made and Chris Hemsworth will be reprising his role as Captain Kirk's father. Fresh off his comic turn in Ghostbusters, the always popular Hemsworth is really turning into a box office force all by himself.

While Star Trek Beyond won't reach the heights of its predecessors, it should end up with just over $200 million. In a year when Paramount has had a lot of decent hits, this will go a long way to helping them hit their annual box office number.

The Secret Life of Pets enjoyed a strong third weekend to take the second spot with $29 million. On the other hand, Ghostbusters fell over 50% in its second weekend to grab a third spot tie with Lights Out with $21.6 million. The Secret Life of Pets is now over $260 million and is well on its way to a $350 million finish and a spot in the top 10 animated films of all time.

Ghostbusters has taken in $86 million so far and will surpass the $100 million this week, but will its total in the $140 million range be considered a win or a loss? Sony is pretty desperate these days for a solid franchise, so I'm willing to bet that they will forge ahead with the planned sequel. I'm betting that a solid home entertainment run and strong word of mouth will pay off when the sequel hits theaters.

As for Lights Out, its $21.6 million opening is considered a big win for the PG-13 horror film. While it seems that comedies are branching out into more R-rated territory thanks to the success of Deadpool, horror films are trying to capture younger audiences and Lights Out is part of that strategy. With the low-budget film well on its way to $60 million, it's safe to say that it's a plan that appears to be working and studios hope will lead to a new audience of horror fans in the years to come.

Rounding out the top five over $20 million is a film that probably isn't too happy with its $21 million opening. Ice Age: Collision Course is the fifth film in the franchise and a noticeable drop-off from the previous openings. While there is an expectation that returns will decrease as the number of sequels go up, this number has to be a disappointment for Fox. I think they were hoping for $30 million and the film's projected total of $80 million might result in the final nail being hammered into the franchise.

First up is a fun video in which Jacob T. Swinney isolated the color green in the Coen Brothers' films. I had never realized how prominent that color was for them, but it's obvious now. That and I really like the contrast to black and white.

The Coen Brothers: Green from Jacob T. Swinney on Vimeo.

On the flip side, I did enjoy the uncharted territory where they were taking the films, so a TV series might be a nice companion to this world and characters.

Cameron let it slip that The Abyss Blu-ray and 4K UHD is going to come out in early 2017. We had heard whispers of this, but knowing that Cameron is notorious for talking the talk and failing to follow-through, we haven't reported it before now.

Of course, like those oft-delayed Avatar sequels, we will believe it when we see it.