Why 'Ghostbusters' is the reboot we need right now 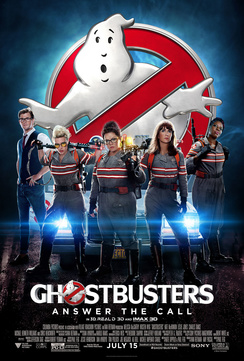 I admit it, I'm a pretty vocal guy. I'm not known as a wallflower who will simply bite his tongue and let something slide. I've also gone on the record as being anti-remake, anti-sequel, anti anything that stymies creativity and fresh stories in Hollywood.

I'm also pushing 42 years old, so get off my lawn.

Look, I get it. PokemonGo is simply the latest reminder that I'm no longer a resident of the target demographic that advertisers desperately want. But wait a minute, I'm not quite yet ready for the Metamucil and "Help, I've fallen and I can't get up" commercials either.

I was 10-years-old when Ghostbusters originally came out and it ignited a fascination and love affair for all things Bill Murray that continues to this day. When I heard they were remaking the film, I was the first in line to sharpen my pitchfork. How dare they rob my childhood yet again? Is nothing sacred?

And then my almost five-year-old daughter said the magical words that changed my perspective on the whole thing. "Daddy, I want to see the Ghostbusters." I was floored. Before you tie me to the stake of bad parenting and strike the match, I had no idea how she even knew this film existed, let alone the original movies.

I figured five was a little young to start exposing her to Bill Murray, but are you ever too young to watch perfection? After a consultation with the wife and a re-watch to make sure it wasn't too inappropriate for her, we allowed her to watch the original Ghostbusters. 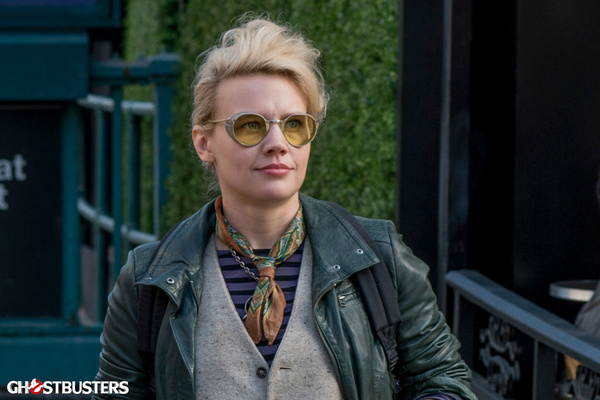 I was awash in the glow of my self-appointed "Father of the Year" award as she hooted and hollered at all the right places. I believe the pinnacle of my fatherhood happened when she got done watching the film and immediately asked if she could watch it again. A couple weeks and at least double-digit viewings later, she uttered the words that no fan of Ghostbusters ever wants to hear.

"Daddy, when can I see the Ghostbusters II?"

My heart raced and sweat started to pour from my palms. Do I lie and tell her that they never made a sequel? Do I snap the DVD in half and blame in on her younger brother? Or do I suck it up and risk the torture of non-stop Ghostbusters II for days simply to appease my child?

Finally, after a moment's hesitation, I broke under the pressure of her pleading and fished out my DVD for Ghostbusters II and put it in the player. What happened next was surely a sign from God. The screen displayed the message, "This disc can not be played."

I took it out and inspected it. Sure enough, there was a crack in the disc and my torture was given a last minute reprieve by the DVD gods. But my daughter was crestfallen, so when AMC started playing the two films nonstop last week, I decided I would surprise her. I recorded Ghostbusters II and we watched it. Again, after the movie was over her words were as if sung by a chorus of angels.

"No Daddy, that's not Ghostbusters II."

I heard, 'Ugh, Dad, how could they destroy the integrity of the original by creating such a stinking pile of turd?'

She quickly clarified. "No, where's Ghostbusters II? You know, the one with the girls?"

At this point, I should probably put everything on Front Street. I've never found Melissa McCarthy to be very funny. Kristen Wiig can be both hilarious and terrible - all in the same scene. So, even before I get to the point of consternation about Hollywood once again raiding my childhood, I had considerable reservations about this movie simply from a casting standpoint.

Some people find Melissa McCarthy to be hilarious, but she's just not my jam and the idea of watching her lead an assault against everything I hold holy from childhood just doesn't like a fun couple of hours to me. But, I love Kate McKinnon and have been a huge fan of hers for years. So, I was torn.

It took just a single look into my daughter's expectant eyes for any consternation to pass. "I'm sorry honey, it doesn't come out in theaters until next week. But, if you want to, we can go and see it then." Over the next week and countless re-watchings of Ghostbusters, I finally got it.

The enjoyment and anticipation that my daughter was experiencing were precisely the reasons that this Ghostbusters needed to be made. In much the same way that she and I were able to bond over The Force Awakens and its strong female protagonist, perhaps we would find some common ground in Ghostbusters.

Or this could be the Ghostbusters equivalent of the prequels and we would both hate ourselves after the credits rolled. Thankfully, it was exactly what the Ghostbusters reboot needed to be. I have to warn you that up until this point, I have refrained from including spoilers, but there might be some light spoilers ahead in case you wish to remain completely unspoiled about the new Ghostbusters. 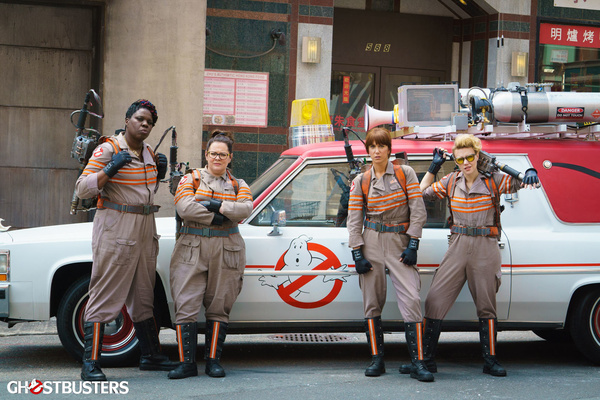 Despite the pain and suffering that was Ghostbusters II (and trust me, I've seen it countless times in the last week, it is really bad) and my general dislike of reboots/remakes, I thought it was an appealing idea to have a Ghostbusters film that would serve to pass the torch to a younger squad. The new squad could be made up of both men and women and it might be fun to see them interact with the old folks, but that would never work.

And that's precisely what Ghostbusters got right. Having a film in which we see an elderly Venkman or Ray show up and proverbial pass the keys to the new Ghostbusters will always pale in comparison to the original film. Furthermore, with the original cast reprising their characters, we would have been forced into this comparison, which would have almost assuredly resulted in a universally panned film.

Instead, by casting the Ghostbusters as an all-woman outfit, Paul Feig is able to truly create his own film, and yet still pay respect to the original movies. Almost the entire surviving original cast save for Rick Moranis show up in Ghostbusters with a cameo. Sure, some are better than others, but they all help to provide fans of the original series a bit of a connection to those films.

Of course, it's where he strayed from the past work that I thought Paul Feig really shined. In the original films, the antagonists were entirely otherworldly, anchored only to our world via surrogates in the form of Dana and Louis in the first film and Janosz in the second film. They were merely the Renfields to the real danger, the ghosts.

But, in Ghostbusters, the antagonist is very much a human with a diabolical plot to basically unleash the dearly departed onto New York City. I know, it's really a matter of splitting hairs, but it's a very important distinction. In many ways, I found Rowan to be far scarier than any ghost in the film because the madness of man knows no depths. The whole idea that a human would be using the very same technology that the Ghostbusters use to cause harm is a fun new angle that the series hasn't explored yet. 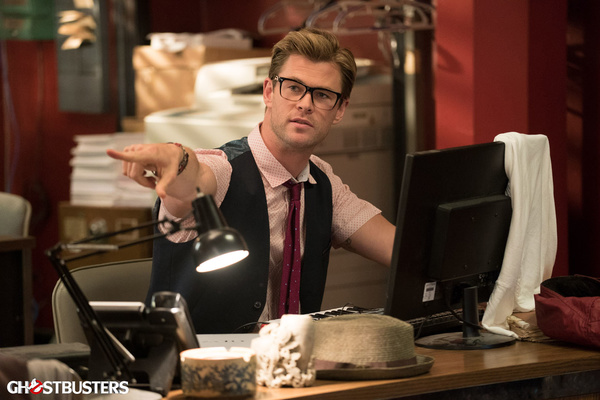 What's better is that this film sets up a sequel that has the potential to be infinitely more enjoyable than Ghostbusters II. I won't give anything away, but make sure you stay through the entire credits to see what I'm talking about. Also, I wouldn't be surprised at all if Chris Hemsworth's Kevin ends up being a key link to the past in the next film.

The film itself is rather ambiguous as to whether it exists in the same world as the original films or is truly a remake. Kevin is the only main character without a last name. Could he be related to a recently departed Ghostbuster? He does utter this quick, but potentially revealing line, "I was born to be a Ghostbuster."

My daughter is too young to understand the concept of a reboot or remake. She also refuses to acknowledge the existence of Ghostbusters II (that's my girl). She keeps referring to the new Ghostbusters as Ghostbusters 2 and I have to keep telling her that it's not Ghostbusters II.

But what do we call it? Calling it the Girl Ghostbusters is just wrong and a disservice to the film and our society's effort to evolve and push Hollywood into the 21st century. Although it is factually accurate that is the Ghostbusters with girls, heck even Slimer gets a female companion in this film. My wife and I decided to call it Ghostbusters 3 in our house because that's precisely what it is. 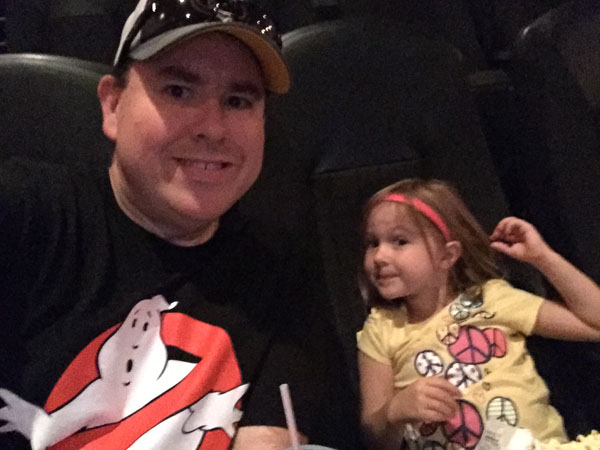 It is the third Ghostbusters film and in many ways it's far superior to Ghostbusters II. Is it perfect? No, far from it, but it's a fun Summer film in many of the same ways that the original film was a fun Summer film in 1984. And just as the world outside of the theater has changed in the last 32 years, so too has the landscape of the films that we watch inside of them.

I have my Ghostbusters and my daughter has her Ghostbusters. She has already decided that she will be a Ghostbuster for Halloween and I will be her Stay-Puft marshmallow man. If for no other reason than that, I am glad that Ghostbusters 3 exists.