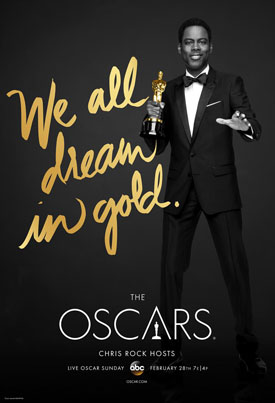 Leading up to this year's Oscars, there were two main questions. Would Leonardo DiCaprio finally win his elusive Oscar and how would Chris Rock react to the racial diversity controversy? Well, it didn't take long to get Chris Rock's reaction as he came out blazing with both barrels firing.

It took a little longer, a bit over three hours to be exact, but we finally got our answer to the Leo question too. After four failed nominations, the fifth time was the charm and Mr. DiCaprio woke up this morning as Oscar-winner Leonardo DiCaprio for the first time ever.

The equally sure-thing Brie Larson won the Best Actress Oscar, but the rest of the night seemed to be filled with more surprises than anything else. The biggest shocker probably came in the Best Supporting Actor category where Mark Rylance bested favorite Sylvester Stallone for his first Oscar for his work in Bridge of Spies.

Early on, the night looked like it would be a landslide for Mad Max: Fury Road as it rode the technical achievement awards to six quick Oscars, but the film faltered as the night went on. The top prize also caught some by surprise as Spotlight took home the Best Picture Oscar, besting both Mad Max and The Revenant.

While the awards were rather benign, the entire evening was tinged with the whole racial diversity controversy that reached the pinnacle of absurdity when Stacey Dash took the stage in a bit that bombed both in the theater and online. The scrolling crawl of thank-yous was a bit intrusive but didn't lead to as many jokes as I was hoping for.

I'm a firm believer that they shouldn't hurry off winners with music. This is a once in a lifetime event for most people and I think most of the people watching want to see and hear everything that the winner wants to put out there. What did you think of the show last night?

Actor In A Leading Role

Actress In A Leading Role

Actor In A Supporting Role

Actress In A Supporting Role