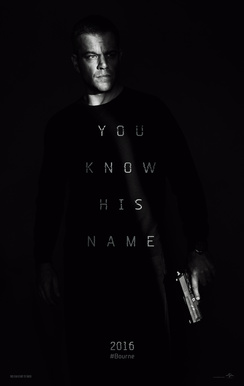 Some people watch the big game for the football while others tolerate the sports to get to the halftime show. Mostly, though, we put up with the crazy spectacle formerly known as the Super Bowl for a chance to see all those wacky commercials that we won't ever see again, but can't stop talking about this morning.

If you're a movie buff like myself, you are really looking forward to the movies that get the Big Game ad treatment. In many cases, these are the first looks that we are getting of these films while in the case of Deadpool, it's most likely our last. Either way, the excitement was palpable in my household last night as we tuned in and waited to be entertained.

The football was a bit boring and the halftime show was predictable and safe, but the movie ads did not disappoint. In fact, they were so good that I decided to rank them from worst to best. I only selected those ads that appeared in the "Countdown to Kickoff" pregame show, the game itself and the post-game show.

I just don't have the kind of time to watch all 32 hours of pregame coverage anymore. But, if I did miss any commercials from earlier in the day, let me know. Without further ado, I present my completely biased ranking of Super Bowl movie ads. Yes, I said Super Bowl, so I'm sure our lawyers will soon get some paperwork.

Teenage Mutant Ninja Turtles: Out of the Shadows

I have to admit that the "original" TMNT in 2014 was much better than I feared it would be. Whatever good karma that film garnered for the franchise looks to be completely lost here. I will give them credit for including Casey Jones and his hockey obsession, but I still don't think that Rock Steady or Bebob are ready for the closeup.

Technically, this wasn't a true promo for the film, but in order to get to 10, it counts! I mean, I guess it's sort of cool that Turkish Airlines would create these real-life aping ads for their airlines, but really, who is buying that Bruce Wayne would ever fly commercial?

The Secret Life of Pets

I've really enjoyed the trailers for this film thus far, but this promo was sort of a lost opportunity for me. There really wasn't anything new here and I'm starting to get a bit tired of the whole headbanging setup at the end of everything. Still, I have faith and the kids will love it.

This is another film franchise that I feel is starting to show its age. I really enjoyed the last film where the two groups came together, but this one looks like another re-tread in many ways. So far, I haven't really been impressed with anything that I've seen, but my wife watched this promo and exclaimed that she wanted to see it. So, it has that going for it.

This film is still the one that intrigues me the most out of upcoming Summer movies. So far, we've got a few teases and this delivers a little more, but it's just a big tease when it's all said and done. This might turn out to be a wise strategy because if I recall the original film was also a bit unknown when it debuted.

Just take my money already. Everything about this film is coming up roses for them, so it's a good thing that it finally hits theaters this weekend. For what it's worth, my wife has no desire to see it, especially on Valentine's weekend.

It looks like Marvel has another winner on their hand with this highly anticipated sequel. The battle lines are clearly drawn with Captain America, Bucky aka The Winter Soldier, Scarlet Witch, Ant-Man, Hawkeye and The Falcon on one side, while Iron Man, Black Widow, War Machine, Vision and Black Panther line up on the other side. On a related note, it's good to see that Ant-Man and The Falcon have patched up their differences. And nope, still no sighting of Spider-Man yet.

The actual commercial doesn't seem to be available, but this longer trailer will do the trick just fine. You already know that I'm really high on this film for 2016, but this ad clinched it for me. My two-year-old son was watching this and he was jumping out of the way and giggling the whole time. He loved it. They did a great job on the TV version by using black bars on the top and bottom of the screen and then having the animals "burst" out of the TV constraints. The effect was impressive enough that my son thought that the animals were actually coming into the family room. I can't wait to share this film with my kids.

Not only did we get our first look at Matt Damon's return as Bourne, but we also got a title and a poster. All in all, it was a very successful debut. The wife approved although we both thought that Damon was looking a bit old. I suppose that was intentional, but you never know. It's also good to see (briefly) and hear Julia Stiles again, I was beginning to fear that she was out of films for good. Sadly, it doesn't look like we are going to get our Matt Damon/Jeremy Renner showdown anytime soon, though.

OK, getting over the fact that J.J. Abrams is some sort of master Jedi who can not only ready The Force Awakens but also serve as a producer to what is sort of a sequel to Cloverfield without giving up the secret until a month before release, this film just looks awesome. The cast is amazing and the story seems to be another of J.J.'s wonderful mystery boxes. We are just a month from release and we really know nothing about this film and I love it. Bravo Paramount!

And yes, if that roar you hear at the end sounds familiar, you've most likely heard it before.