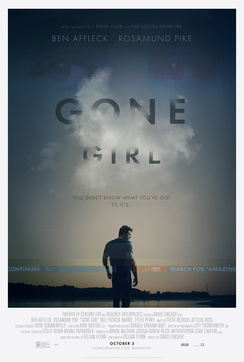 Do you feel it? That nip in the air and the rush of leaves falling to the ground?

That's right, Fall is finally here and with it comes the inevitable onslaught of award-contending and family-friendly films that marks the season. This weekend, we saw a little of the former and none of the latter.

October is a month in transition. It's really trying to find its identity. For many decades it was fertile ground for the latest and greatest horror films. The Saw franchise made a killing (pun intended) over the course of many Octobers and before that we saw similar October success stories for Halloween, A Nightmare on Elm Street and countless other horror franchises.

So, I suppose it's only fitting that in the first week of this ominous month, we have a photo finish between an awards contender and a horror film. Without further ado here is the MM.

Coming down the stretch, it's the popular director with the pretty stars in a film based on a bestselling book. But don't look now, here comes the upstart horror prequel with enough gumption to actually pull off the upset. It's going to be close, and the winner is-

Gone Girl, by a nose. Or Ben Affleck's amazing cleft chin, whichever floats your boat. The David Fincher-directed film was the talk of the town for its twisty, whodunit plot and cool performances and yet, it still struggled to hold off the pesky Annabelle. Of course, that doll freaks me out, so I'm not surprised at all that it was hit with the scare and fright crowd.

Gone Girl debuted with $38 million while Annabelle opened up with $37.2 million. I'm happy so say that I helped contribute to Gone Girl's win and I can report that the film is every bit as dark and creepy as the book. Believe it or not, this is the highest opening gross for Fincher. Looking back on his resumÃ©, I'm still shocked by this, but it's true. Given the good word of mouth and potential for awards success, I can see this film limping to $125-$130 million.

Life must be good for James Wan. While the Conjuring director only took a producing credit on the prequel Annabelle, his fingerprints are all over it. You could say that the dude has the Midas touch because ever since he broke on the scene with 2004's Saw, everything he touches makes a ton of money.

Annabelle looks to be his latest hit and should wind up in the $90 million range.

The other wide release new film Left Behind, a remake of those Kirk Cameron films, failed to register much nationally. It only made $6.8 million in sixth place, which, surprisingly, is one of the better openings lately for star Nicolas Cage. One good thing came out of this film though. We learned that the rapture will be rated PG-13.

I don't know if I can wait until 2016, but I bet this spurs a lot of people to sign up for Showtime in the next couple of years.

Well, that's it for this week. I hope you've had a great weekend, but now it's time to move on to the week ahead.

Until next week, Mix Well!