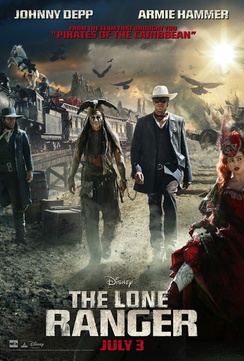 If you asked me to quickly compile a list of the top 10 films of 2013, I'm pretty sure that The Lone Ranger wouldn't even sniff the list let alone appear on it. But, don't tell that Quentin Tarantino, he's apparently a big fan of the Disney box office flop.

And really, what correlation does box office success really have with a film's level of quality? And, you know, film enjoyment is purely subjective anyhow. And yet, each year we look to "experts" or those that we respect in the field to get their opinion on the top films of the year.

The results are actually quite predictable. Top critics seem to stick to those films that shined during awards season, while quirky industry types pick small, unheralded films in an attempt to prove they are smarter than you or pretentious or probably both.

Quentin is somewhere in the middle and he has put out an annual "best of" list since 2010 with the exception of last year when Django Unchained took up too much of his time to be able to contribute a list (at least that's the word from his official unofficial site). But unlike other lists, Quentin actually watches real movies and isn't ashamed to admit that he like films such as The Lone Ranger, The Three Musketeers or Get Him to the Greek.

Of course, in true Quentin fashion, he basically releases his list whenever he feels like it and there may or may not be an order to it. So, we're not really surprised to see a Best Films of 2013 list from Quentin in early October. They did preface the list by saying that it's the best films "so far," so who knows maybe we'll get an updated list once the year is over.

Here are Quentin Tarantino top ten films of 2013 (so far) in alphabetical order.

It's refreshing to see Drinking Buddies on the list as it's a film that I've been dying to see for some time now. I also never miss the opportunity to toot our own horns and this list is a bit of an endorsement (not officially, please don't sue us Quentin) for our annual sleeper lists. It contains three films that Tim, Dannette and I put on our sleeper list.

Tim included The Conjuring on his list, Dannette was all over Frances Ha on her list while I gave props to This Is The End on my list.