As The World Turns: Megan Fox out of 'Transformers 3' 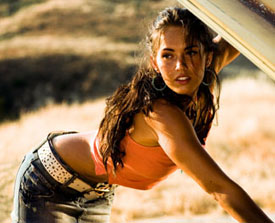 We're not really the type of site that reports all the rumors of Hollywood. Trust me, there are plenty of sites out there with way better connections and a lot more resources than us to keep the rumor mill churning.

But sometimes, a story is so massive or its effects so outreaching that we feel compelled to talk about it. And no, I'm not talking about Lindsay Lohan's pending arrest.

What we are talking about is yet another young Hollywood starlet seemingly letting opportunity slip through her fingers. Nikki Finke over at Deadline broke the news yesterday afternoon that Paramount and Michael Bay have decided against exercising their option on Megan Fox for Transformers 3.

Late last night, Megan's PR rep issued a statement that it was really Megan's decision not to return for the third movie, although, if she were under contract to return and she unilaterally made the decision to drop out of the project wouldn't that make her in breech of her contract? And wouldn't that give Paramount the option to litigate in order to force her to uphold the terms of the contract?

Do you hear that? Yep, virtual crickets folks.

This little episode is just the latest in a year long fighting match between actress and director. Megan started things off last year while promoting her movie Jennifer's Body when she claimed that Bay likes to "create this insane, infamous mad-man reputation. He wants to be like Hitler on his sets, and he is. So he's a nightmare to work for."

I'm pretty sure calling your "boss" Hitler is still a no-no in most circles. Bay's infamously tight-knit crew (and really why wouldn't they be? Michael Bay lets them blow stuff up all day long) immediately fought back with an open letter to all Michael Bay fans via his web site wherein they basically tore her to shreds and painted her in such a light that Lindsay Lohan looks meek, humble and sane by comparison (and yes, I did just bring that full circle).

Then, this past October when they were starting to gear up for Transformers 3, Bay offered a snarky peace branch, again via his web site. "P.S. Megan Fox, welcome back. I promise no alien robots will harm you in any way during the production of this motion picture. Please consult your Physician when working under my direction because some side effects can occur, such as mild dizziness, intense nausea, suicidal tendencies, depression, minor chest hair growth, random internal hemorrhaging and inability to sleep. As some directors may be hazardous to your health, please consult your Doctor to determine if this is right for you."

Oh yeah, somewhere in there Megan claimed that working on Bay's set were dangerous or something like that. I really can't recommend enough to go read Shia LaBeouf's love interest in the upcoming Transformers movie. The Wrap touts that "nn individual close to the casting process" has told them that Gemma Arterton has already had discussions with producers about the role.

Gemma made a splash in the James Bond flick Quantum of Solace and is set to sizzle on the big screen this Summer in Prince of Persia: The Sands of Time.

Meanwhile, over at AICN they are relying on their "highly trustworthy sources" in naming Emmanuelle Chriqui, Zoe Saldana, Hayden Panettiere and Ashley Greene as possible replacements among a slew of other, lesser knowns.

In other words, this soap opera is just starting to ramp up, but one thing is certain. Transformers 3 is set to start filming soon with a July 2011 release slated, so the casting news is bound to be coming in the very near future.

In the meantime, feel free to tell us who you would cast in the role.