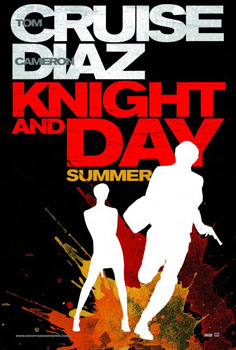 I know it's early, but 2010 is looking like the year of the comeback for fallen A list celebrities. Mel Gibson looks to be getting back to what he does best in next month's Edge of Darkness that is already getting rave reviews from its trailer alone.

So, it's only fitting that long beleaguered A-lister Tom Cruise would get his shot to win his way back into our cinematic hearts. Last year, he made considerable progress in a comic turn as an almost unrecognizable movie producer in Tropic Thunder and it seems that he will attempt to complete his comeback with next year's Knight and Day.

I'll be honest, I saw the teaser poster (right) a few days ago and I wasn't moved by it at all. Sure, it has a certain James Bond whimsy about it, but as a teaser poster, it's one that I would certainly gloss over at the megaplex. So, when I saw the trailer over at E! Online, my expectations were quite low.

However, it seems that after watching said trailer, Cruise might be back in a big way. He seemingly captures the comic innocence from his Risky Business days (complete with black rimmed sungalsses) and the fierce action star from his Mission: Impossible roles. It makes for a pretty good balance that, if this trailer is a good indication, will have audiences flocking to the megaplexes next Summer to once again pray at the altar of Cruise.

What do you think? Watch it below and let us know if you're a believer.