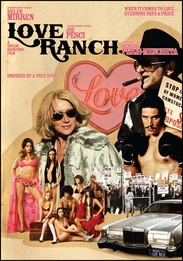 LOVE RANCH is the bizarre but true story of the origins of Northern Nevadaâs phenomenally successful Brothel Industry.Â  In the 1970s, Joe & Sally Comforteâs Mustang Ranch outside Reno, Nevada, was Americaâs first and most infamous legalized house of prostitution.Â  Portraying these two modern-day outlawsÂ as fictional characters are Academy AwardÂ® Winners, Joe Pesci and Helen Mirren.Â  Â An ex-taxi driver, Charlie Bontempo (Pesci) has actually made his American Dream come true â promoting the legalization of prostitution in Nevada and delivering to himself and his wife a literal âpot of goldâ.Â  Grace Bontempo (Mirren) is the brains behind Charlieâs money-making machine - a tough, intelligent âMadameâ whose task it is to manage the twenty eccentric women who work as prostitutes at The Ranch.Â  LOVE RANCH reveals the human side of this illicit cottage industry when Charlie buys the contract of Argentine heavy-weight champion, Armando Bruza (Sergio Peris-Mencheta) in hopes of promoting a World Championship fight between Bruza & Muhammad Ali.Â  Because Charlie is an ex-felon he names Grace as Bruzaâs titular manager, setting off a flame of passion in his seemingly unshakeable wife that erupts into a love triangle with murderous repercussions.

Rated R for sexual content, pervasive language and some violence.