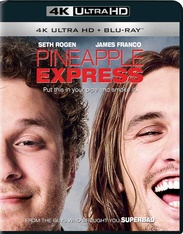 Lazy stoner Dale Denton (Seth Rogen) has only one reason to visit his equally lazy dealer Saul Silver (James Franco): to purchase weed, specifically, a rare new strain called Pineapple Express. But when Dale becomes the only witness to a murder by a crooked cop (Rosie Perez) and the city's most dangerous drug lord (Gary Cole), he panics and dumps his roach of Pineapple Express at the scene. Dale now has another reason to visit Saul: to find out if the weed is so rare that it can be traced back to him. And it is. As Dale and Saul run for their lives, they quickly discover that they're not suffering from weed-fueled paranoia; incredibly, the bad guys really are hot on their trail and trying to figure out the fastest way to kill them both. All aboard the Pineapple Express.