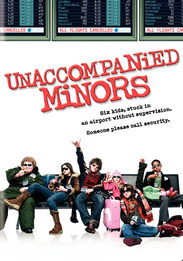 It's Christmas Eve and a huge blizzard has just shut down the airport, threatening to ruin holiday plans for all stranded travelers. Snowed in en route to their father's house, two "Unaccompanied Minors" - dubbed UMs - Spencer and his little sister, Katherine, are ushered to the airport's Unaccompanied Minors Room, a holding cell for dozens of stranded, parent-free kids from all over the country.

Caught in the crossfire of projectile cupcakes and juice boxes and desperate to escape, Spencer makes a run for freedom along with four other UMs, who couldn't be more different if they tried: spoiled rich girl Grace, trailer-park tomboy Donna, academic overachiever Charlie and comic-book geek Timothy Wellington a.k.a. "Beef."

With the airport's peevish Passenger Relations Manager Oliver Porter, his lackey assistant Zach Van Bourke and every airport security guard hot on their trails, this group of UMs from cliques that don't mix learn to ditch their differences and help each other flee the clutches of airport authority. Meanwhile, Katherine and the other UMs have been herded to a nearby hotel to wait out the storm.

Determined to reunite with his little sister and fulfill her unspoiled vision of Santa Claus arriving on Christmas morning, Spencer enlists the help of his UM posse. Working together as an unlikely family of their own, they outwit and outrun Oliver and his crew.

Plummeting through baggage chutes, rummaging around unclaimed luggage and canoeing down a snow-covered hill, they turn Christmas at the airport into holiday pandemonium and, along the way, prove that the holidays aren't about where you are, but who you're with.