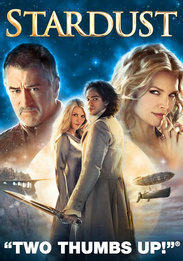 "Stardust," based on the best-selling graphic novel by Neil Gaiman and Charles Vess, takes audiences on an adventure that begins in a village in England and ends up in places that exist in an imaginary world. A young man named Tristan (Charlie Cox) tries to win the heart of Victoria (Sienna Miller), the beautiful but cold object of his desire, by going on a quest to retrieve a fallen star. His journey takes him to a mysterious and forbidden land beyond the walls of his village. On his odyssey, Tristan finds the star, which has transformed into a striking girl named Yvaine (Claire Danes).

Rated PG-13 for fantasy violence and some risque humor.