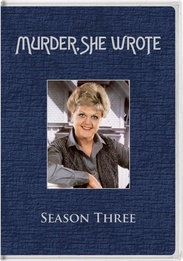 Get ready to open another chapter of TV's most beloved crime series, Murder, She Wrote, with all 22 entertaining episodes from season three! Acclaimed actress Angela Lansbury won a Golden GlobeÂ®for Best Actress in a Drama in this season, and it's no big mystery to see why. From international espionage to insurance scams to murder in the air, Jessica Fletcher (Lansbury) is the only one clever enough to read between the lines and see the clues nobody knew were there. Along for the chase are a stunning line-up of guest stars, including George Clooney, Courteney Cox, Leslie Nielsen, Tom Selleck and many, many more. It's a mystery lover's dream come true!