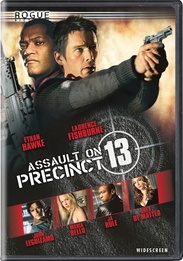 When snow forces all vehicles off the road, a bus full of prisoners being transferred takes refuge in an old police station that is on the verge of being shut down. Among the prisoners is a mobster that plenty of people want to killed, while others would love nothing more than to procure his freedom.

As night falls, a makeshift force of cops and prisoners must fight off the gang that is set on freeing their jailed leader.

Rated R for strong violence and language throughout, and for some drug content.