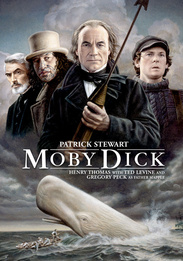 Herman Melville's classic tale comes to life like never before in this suspenseful and thrilling new adaptation. Welcome aboard the Pequod, a Nantucket whaling ship under the dubious command of Captain Ahab (Patrick Stewart, TV's Star Trek: The Next Generation), a man obsessed with vengeance against a menacing beast that not only stole the lives of his former crew but continues to haunt him from the sea. Co-starring Academy Award winner Gregory Peck (To Kill A Mockingbird) and Golden Globe Nominee Henry Thomas (E.T. - The Extra-Terrestrial), Moby Dick takes you on an epic journey into the deepest waters of the ocean - and the furthest reaches of sanity - in pursuit of the legendary white whale.

Rated PG for mild language and for some intense whaling action/violence.