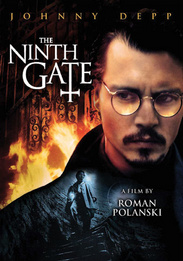 Corso (Depp) is a rather dubious rare book finder, whose services are engaged by the owner of one of Europe's largest collection of demonic texts. The prize of his collection is a 16th century tome entitled "The Nine Gates," a book containing nine etchings that supposedly hold the key to summoning Satan himself. Dean Corso (Johnny Depp) is highly skilled at his work, a position which requires dexterity, cultural expertise, nerves of steel...and few scruples. Known for locating rare books for wealthy collectors, Corso is hired by eminent book-lover and scholar of demonology, Boris Balkan (Frak Langella). Corso's mission: to find the last two volumes of the legendary manual of satanic invocation "The Nine Gates of the Shadow Kingdom," compare them with Balkan's first volume, supposedly the only one of its kind, and ascertain the authenticity of the series.