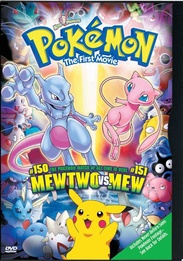 Ash Ketchum and his felow Plkemon trainers, Misty and Brock continue their quest to become the greatest Pokemon masters of all time. Teamed up with the favorite, electrically charged yellow Pokemon, Pikachu, they are lured into a massive Pokemon battle which will take all their courage and skill. The challenge becomes even greater when Mewtwo, a bio-engineered Pokemon, creates a new strain of "Super Pokemon" and sets the stage for the ultimate battle.