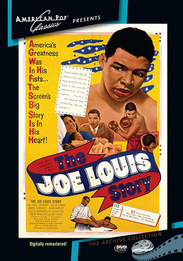 There is rarely an argument when it comes to the question of who the greatest fighter of all time is. Here is that man's story. With Coley Wallace (a boxer himself at one time) in the role of Joe Louis, this film follows the boxer's rise from poor family background to world heavyweight champion. Over the course of 12 years, Louis successfully defended his title a record 25 times. But the movie also documents the equally-important challenges he faced outside the ring, overcoming racism to help change the way black men were viewed, and ultimately become America's first true black sports hero.This is the story of the life and career of Joe Lewis, the boxing legend who was the World Heavyweight Champion for 12 years, and his fights in the ring and with racism in America.