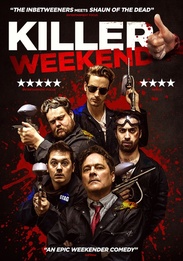 When Sam discovers that his stag weekend not only is a mock zombie survival experience, but that his disapproving father-in-law-to-be has also been invited, he couldn't be more annoyed. But when the bachelor party arrives to find the 'zombies' are in fact a bunch of psychotic ex-soldiers, their fantasy weekend quickly starts to look like a nightmare. After a series of unfortunate mishaps finds the group trapped in a disused nuclear bunker besieged by the bloodthirsty troops, Sam must ask himself: Is it all still just a game, or is it actually game over?