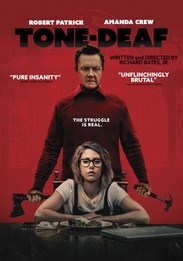 After being dumped by both her boss and her boyfriend, Olive (Amanda Crew) flees the city for the weekend and rents an ornate country house from an old-fashioned widower named Harvey (Robert Patrick). Sheâs hoping for a few days of peace. What she gets is a weekend of sheer terror, as Olive awakens Harveyâs darkest urges â and is plunged into a blood-soaked fight for her life.