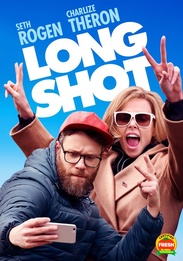 From the celebrated team of Seth Rogen and Evan Goldberg, creators of outrageous comedy hits including THIS IS THE END and NEIGHBORS, comes LONG SHOT. Seth Rogen stars as Fred Flarsky, a hard-partying journalist whoâs got it bad for Charlotte Field (Charlize Theron), his first crush turned presidential candidate. After Charlotte hires Fred as a speechwriter, he is a fish out of water on her elite team. But sparks fly as he turns her on to a wild new world of raging parties, secret rendezvous, and hilarious rule-breaking.

Rated R for strong sexual content, language throughout and some drug use.