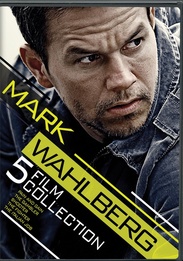 Shooter: Bob Lee Swagger (Mark Wahlberg), a former Marine Corps sniper who leaves the military after a mission goes bad. After he is reluctantly pressed back into service, Swagger is double-crossed again. With two bullets in him and the subject of a nationwide manhunt, Swagger begins his revenge, which will take down the most powerful people in the country.

Pain & Gain: When an ambitious group of personal trainers go after the American Dream, they get caught up in a criminal enterprise that goes horribly wrong. Now, living large will take everything theyâve got in this unbelievable and outrageous true story.

The Fighter: Academy AwardÂ® Nominees Mark Wahlberg*(The Departed), Christian Bale** (The Dark Knight) and Amy Adams***(Doubt) star in this âremarkableâ â film. Based on a true story, two brothers, against all the odds, come together to train for a historic title bout that has the power to reunite their fractured family and give their hard-luck town what it's been waiting for: pride. Micky Ward (Wahlberg) is a struggling boxer long overshadowed by his older brother and trainer, Dicky (Bale), a local legend battling his own demons. Their explosive relationship threatens to take them both down - but the bond of blood may be their only chance for redemption. â Joe Morgenstern, THE WALL STREET JOURNAL

The Italian Job: The plan was flawless. The execution was perfect. Charlie Croker pulled off the crime of a lifetime. The one thing that he didn't plan on was being double-crossed. Now he wants more than the job's payoff...he wants payback. Mark Wahlberg is electrifying as Croker in this 'fast and furious action-adventure.'* Along with a drop-dead gorgeous safecracker (Charlize Theron), Croker and his team take off to re-steal the loot and end up in a pulse-pounding, pedal-to-the-metal chase that careens up, down, above and below the streets of Los Angeles. With an ensemble all-star cast that also includes Edward Norton, Seth Green, Jason Statham, Mos Def, Franky G and Donald Sutherland, The Italian Job is 'Hot!'

The Gambler: Academy AwardÂ®-nominee* Mark Wahlberg delivers a âcareer-defining performanceâ as Jim Bennett, an English professor leading a secret double life as a high-stakes gambler. When Jim borrows money from dangerous gangsters, he places the lives of those he loves in mortal danger. With time running out, he must enter the criminal underworld and risk everything to keep from losing it all. John Goodman, Brie Larson and Academy Award-winner Jessica Lange star in the thrilling film critics are calling âgritty, intense and wholly engrossing.â* *Scott Mantz, Access Hollywood.

The Fighter
The Gambler
The Italian Job
Pain & Gain
Shooter