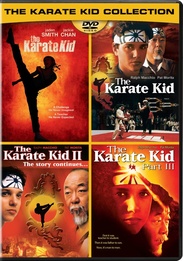 KARATE KID (1984): There is more to karate than fighting. This is the lesson that Daniel (Macchio), a San Fernando Valley teenager, is about to learn from a most unexpected teacher: Mr. Miyagi (Morita), an elderly handyman who also happens to be a master of martial arts. So when he rescues Daniel from the Cobra Kai, a vicious gang of karate school bullies, Miyagi instills in his young friend the importance of honor and confidence as well as skills in self-defense, vital lessons that will be called into play when a hopelessly outclassed Daniel faces Johnny, the sadistic leader of the Cobra Kai, in a no-holds-barred karate tournament for the championship of the Valley. KARATE KID (2010): When Dre Parker (Jaden Smith) and his mother (Taraji P. Henson) move from Detroit to China, Dre feels lost in a world very different from what he knows. Bullied and beaten up by some fellow students in his school, Dre is rescued by his apartment buildingâs handyman, Mr. Han (Jackie Chan), a man who is mourning a devastating loss. Mr. Han takes pity on Dre and agrees to teach him kung fu to defend himself. Training together, teacher and student learn to trust each other, and ultimately form a friendship that heals them both. KARATE KID: PART II: Returning with Daniel (Ralph Macchio) to his Okinawa home for the first time in 45 years, Miyagi (Noriyuki âPatâ Morita) encounters Yukie (Nobu McCarthy), the woman he left behind when he immigrated to America. And just as Daniel falls in love with her teenage niece Kumiko (Tamlyn Tomita), two enemies arise to challenge both couplesâ happiness: Sato (Danny Kamekona), the man whom Yukie was once supposed to marry, and Chozen (Yuji Okumoto), his vicious nephew whoâs taken an instant dislike to Daniel. And now, to satisfy their family honor, theyâve challenged Miyagi and Daniel each to a duel, karate matches so brutal, that only the winners shall survive. Features the 1986 OscarÂ®-nominated song, âGlory of Love.â KARATE KID: PART III: Karate Kid, Daniel Larusso, risks losing it all when he places pride before principle in this dramatic film that reunites stars Ralph Macchio and Noriyuki "Pat" Morita. When Daniel (Macchio) decides not to compete in the upcoming karate championship, he becomes the target of vicious Cobra Kai student, Mike Barnes (Sean Kanan), who's determined to win the title back. Standing firm, Daniel's mentorand trainer, Mr. Miyagi (Morita), instructs him to ignore Mike's threats - and stay away from the tournament. But when Mike's relentless abuse escalates into blackmail, Daniel finds himself forced into competition - and at serious odds with Miyagi, the one person he cherishes most. Desperate, Daniel turns to another karate instructor, Terry Silver (Thomas Ian Griffith), whose violent combat techniques are directly opposed to Miyagi's wise instruction. But when Daniel realizes that Terry and Mike are allied with Mr Miyagi's old nemesis, Kreese (Martin Kove), in an elaborate set-up for revenge,he also knows he has alienated the only person who can help him. A riveting story of independence, inner strength and self enlightenment, THE KARATE KID, Part III is a powerful new chapter in this popular series of films.