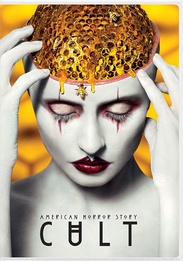 Surrender your will to all 11 episodes of the seventh season of one of TVâs most terrifying series. It is post-election 2016, and Ally Mayfair-Richards (EmmyÂ®winner Sarah Paulson), a Michigan woman plagued by phobias, attempts to find happiness as a restaurateur alongside her chef wife (Alison Pill) and son. But Allyâs family and her grip on reality are threatened by the arrival of Kai Anderson (Evan Peters), a politically motivated cult leader whoâs plotting an unthinkable mass murder. Also starring Cheyenne Jackson and Billie Lourd, American Horror Story:Cult is a scrumptious scare-fest served up with social commentary, pinky swearing, clown suits and gaslighting.