This is Our Land 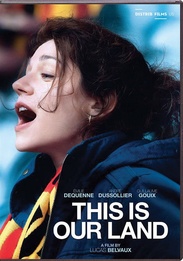 Marine Le Pen was defeated in the French election that brought Emmanuel Macron to power, but her far right-wing party, with its nationalist, anti-immigrant platform, lives on to feed the fear and resentment that begot Donald Trumpâs election.

THIS IS OUR LAND is a fictionalized story of an attractive working-class single mother in the North of France who naively agrees to run for mayor, representing the Patriotic Bloc. Lucas Belvaux, who previously directed RAPT, about a French politicianâs kidnapping, deals with another type of kidnapping here: With the help of a charming AndrÃ© Dussollier as the townâs esteemed physician, the Populistsâ rhetoric seizes control of the minds of the electorate. With Catherine Jacobs as the blonde-bobbed leader who never met an angry crowd she couldnât make angrier.