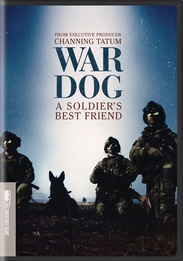 From executive producer Channing Tatum and director Deborah Scranton (The War Tapes) comes a deeply personal documentary that highlights the intimate relationship between veterans and their K9 companions, both during combat and as they readjust to civilian life. Focusing on three courageous dogs (Layka, Mika and Pepper) and the soldiers who served by their side in the most elite forces in the military, War Dog: A Soldier's Best Friend recognizes the invaluable impact these war dogs have during their deployments, finding and disarming enemies while providing emotional support to troops in the bleakest of hours. Featuring exclusive military footage, photos, and revealing interviews with the handlers â who open up about the physical and emotional struggles they've faced â the film is ultimately a tribute to man's best friend, underscoring the incredibly important role that these canine soldiers play in the lives of their human counterparts, and the unwavering loyalty and bravery that make these four-legged comrades in arms heroes in their own right.