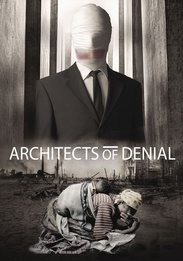 Architects of Denial is a first-person account of genocide through the eyes of survivors. Included are interviews with Julian Assange, George Clooney, experts who graphically illustrate the real connection between historical denial with present-day mass exterminations in conflict zones around the world including Armenia and exclusive footage of politicians caught denying the Armenian genocide. This film warns that those responsible for genocides who are not brought to justice and confronted with the truth of their crimes will only set the stage for more worldwide massacres in the future.