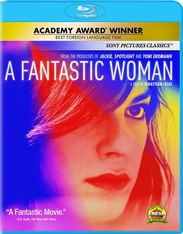 Marina and Orlando are in love and planning their future, when one night Orlando suddenly falls ill and passes away. Instead of being able to mourn her lover, Marina is treated with suspicion by authorities and with disdain by his family. She is forbidden to attend his funeral and thrown out of the apartment they shared. Marina is a trans woman and for most of Orlandoâs family, her sexual identity is a perversion. So she must battle the very same forces that she has spent a lifetime fighting just to become the woman she is now â a complex, strong, forthright and fantastic.