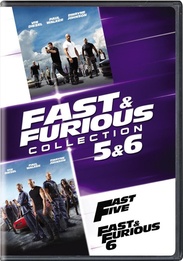 Fast Five: Fugitive Dominic Toretto (Vin Diesel) partners with former cop Brian O'Conner (Paul Walker) on the opposite side of the law in exotic Brazil where they are hunted by a high-powered U.S. strike force led by its toughest Fed (Dwayne "The Rock" Johnson) and an army of corrupt cops working for a ruthless drug kingpin.