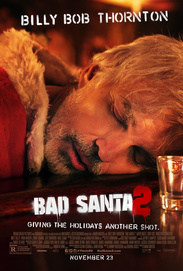 Fueled by cheap whiskey, greed and hatred, Willie teams up once again with his angry little sidekick, Marcus (TONY COX), to knock off a Chicago charity on Christmas Eve. Along for the ride is âthe kidâ - chubby and cheery Thurman Merman (BRETT KELLY), a 250-pound ray of sunshine who brings out Willieâs sliver of humanity.

Mommy issues arise when the pair are joined by Academy AwardÂ®, Golden Globe and Emmy-winner KATHY BATES, as Willieâs horror story of a mother, Sunny Soke. A super butch super bitch, Sunny raises the bar for the gangâs ambitions, while somehow lowering the standards of criminal behavior. Willie is further burdened by lusting after the curvaceous and prim Diane, played by Emmy Award-nominee CHRISTINA HENDRICKS, the charity director with a heart of gold and libido of steel.

Rated R for crude sexual content and language throughout, and some graphic nudity.