Love is a Verb 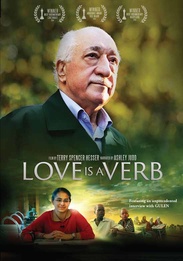 LOVE IS A VERB is an examination of a social movement of Sufi-inspired Sunni Muslims that began in Turkey in the 1960s and now spans the globe. At the center of the film is Fethullah GÃ¼len, the inspiration for a global movement of faithful Muslims inspired by his teachings. Preaching social activism, dialogue, education and peace, GÃ¼len has now inspired two generations of educators and humanitarian workers where they are most needed around the globe, while at the same time being the focus of controversy in his home country and abroad due to his political activism. In 2013, Time magazine named GÃ¼len as one of the most influential people in the world. This extraordinary man of peace, despite now living in self-imposed exile in Pennsylvania, continues to speak out for a tolerant Islam that embraces science and interfaith cooperation.