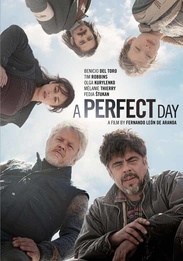 Itâs just another day on the job for a band of badass war zone rescue workers as they defy death and confront warâs absurdities. The setting is 1995, âsomewhere in the Balkans.â Over the course of 24 breathless hours, MambrÃº (Benicio del Toro), leads his team of humanitariansâincluding hard-bitten, wisecracking veteran B (Tim Robbins) and new recruit Sophie (Melanie Thierry)âas they deal with a most unexpected crisis, layers of bureaucratic red tape, and the reappearance of MambrÃºâs old flame (Olga Kurylenko). Through it all, the group handles the less-than-glamorous realities of life in a combat zone the only way they know how: with selfless bravery and a healthy dose of irreverent humor.

Rated R for language including some sexual references.