The Facts of Life: The Complete Series 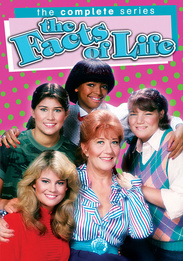 Spinning off from the hit show Diffârent Strokes, The Facts of Life debuted in August of 1979 and aired on NBC for nine seasons. The show focused on Mrs. Garrett (Charlotte Rae), a headmistress at an exclusive girls school, who took a particular interest in four students: The wealthy, spoiled Blair (Lisa Whelchel); Chubby, fun-loving Natalie (Mindy Cohn); Nosey and gossipy Tootie (Kim Fields) and the street-wise but caring Jo (Nancy McKeon). The popular series went on to becomes one of the longest running sitcoms of all time and is firmly entrenched in 80âs pop culture.