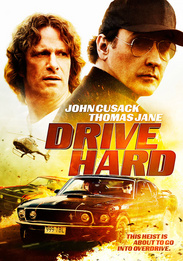 Former hotshot racecar driver Peter Roberts (Thomas Jane, The Punisher) traded the winnerâs circle for safety, stability, a pile of debts and a 9 to 5 job as a beginnersâ driving instructor. But his life shifts into overdrive when mysterious out-of-towner Simon Keller (John Cusack, Numbers Station) shows up for a driving lesson and hijacks Peter to be his getaway driver in a $9 million heist. Now these unlikely fugitives are on a white knuckle race to stay one step ahead of the mobsters who want their money back and the corrupt cops who will kill anyone who gets in their way. Peter and Simon just might have half a chance, if they can stick to the plan, drive faster than the bullets being fired at themâ¦and donât kill each other first.