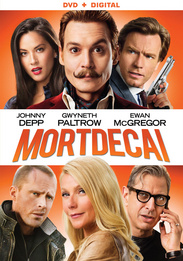 He will thrill you, he will dazzle you, but most importantly he will grow on you. Spend a little time with Mortdecai (Johnny Depp) - In theaters February 6, 2015 Juggling some angry Russians, the British Mi5, his impossibly leggy wife and an international terrorist, debonair art dealer and part time rogue Charlie Mortdecai (Johnny Depp) must traverse the globe armed only with his good looks and special charm in a race to recover a stolen painting rumored to contain the code to a lost bank account filled with Nazi gold.

Rated PG-13 for sexuality including references and innuendo, action/violence and brief strong language. Previously rated R for some language and sexual material.