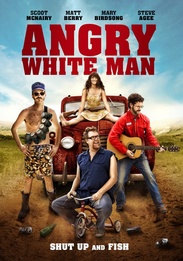 Skeeter Freeman is struggling in a sea of boiled peanuts and debt. Only two things keep him from becoming an Angry White Man - his upcoming nuptials and his two best friends. Walt - a boiled peanut connoisseur- and Floyd -a whorticultural engineer- When a horrifically funny event ruins his wedding - Skeeter goes on a journey to meet his idol, Bulldog Hays, in search for some much-needed inspiration. When Bulldog turns out to be nothing like he imagined, Skeeter has to rely on himself, a limited supply of moonshine, broken shotguns, loose women, cheap drugs and his two redneck friends to fulfill his dream.