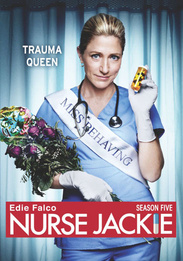 NURSE JACKIE returns for a fifth season with Edie Falco as Jackie Peyton, a role that has earned Falco her third consecutive Primetime EmmyÂ® nomination. After leaving rehab early, Jackie finds sobriety and relative happiness -- but that is the calm before the storm. With her marriage coming to an end, a careless accident sends Jackie to her own All Saints Hospital for emergency care. While recovering, she meets NYC policeman Frank Verelli (Adam Ferrera), whose flirtatious advances may lead Jackie into uncharted territory: dating. Stepping out of her usual comfort zone, challenged by new colleagues, Jackie faces her one-year sobriety anniversary.