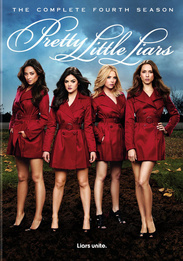 Senior year will be the best year everâ¦ if the Liars can survive it! In the aftermath of the mysterious lodge fire, Aria, Emily, Hanna and Spencer turn to a surprising new ally to help them discover what happened that night, and to try to uncover Red Coatâs next move. But when a new corpse appears in Rosewood, the girls are drawn into yet another murder investigation, one that puts a cloud of suspicion around them and their closest friends and family. With Red Coat lurking in the shadows and the truth about Alison closer than ever, finishing high school has never been more dangerous! Catch the shocking new twists and turns in all 24 episodes of the blood-soaked darling of a series based on author Sara Shepardâs best-selling books.