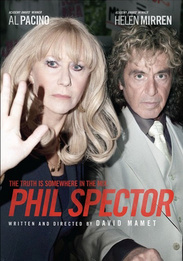 Academy AwardÂ® winners Al Pacino and Helen Mirren star in a new HBO Films production written and directed by Pulitzer Prize-winning and OscarÂ®-nominated playwright David Mamet. Phil Spector is Mametâs exploration of the client-attorney relationship between legendary music producer Phil Spector (Pacino) and defense attorney Linda Kenney Baden (Mirren), who represented Spector during his first trial for murder. The film is executive produced by Academy AwardÂ® winner Barry Levinson and David Mamet and produced by EmmyÂ® winner Michael Hausman. An HBO Films presentation of a Levinson/Fontana Production, the film also stars EmmyÂ® nominee Jeffrey Tambor and Golden Globe nominee Chiwetel Ejiofor. In the hands of celebrated playwright, screenwriter, author, director and producer David Mamet, Phil Spector is a mythological story, and he approaches it as a mythological story, rather than as a news story. Mamet begins his film with the card, âThis is a work of fiction. Itâs not âbased on a true story.â It is a drama inspired by actual persons in a trial, but it is neither an attempt to depict the actual persons, nor to comment upon the trial or its outcome.â