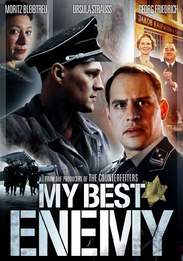 Victor (Moritz Bleibtrau, Run Lola Run, Munich), the son of wealthy Jewish art dealers, and Rudi, the son of their servant, are best friends despite their class differences and the fact that they both love the same girl, Lena (Ursula Strauss, Revanche). But World War II upends everything, turning Rudi into a Nazi and Victor into a helpless pawn. Helpless, that is, until a priceless drawing by Michelangelo becomes crucial to Nazi plans and only Victorâs family knows where it is. The ensuing game of cat and mouse between the two old friends results in plane crashes, stolen identities and solving the biggest mystery of all: the key to Lenaâs heart. Combining the dangers of World War II with the twists and turns of Oceanâs Eleven, MY BEST ENEMY is an entertaining tale of turmoil and triumph.