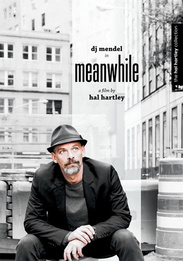 Meanwhile is the new film by American independent filmmaker, Hal Hartley. Meanwhile concerns Joe Fulton (DJ Mendel), a man who can do anything from fixing your sink to arranging international financing for a construction project. He produces online advertising and heâs written a big fat novel. Heâs also a good drummer, but success eludes him. For Joe canât keep himself from fixing other peopleâs problems â his own ambitions are constantly interrupted by his willingness and ability to go out of his way to help others.